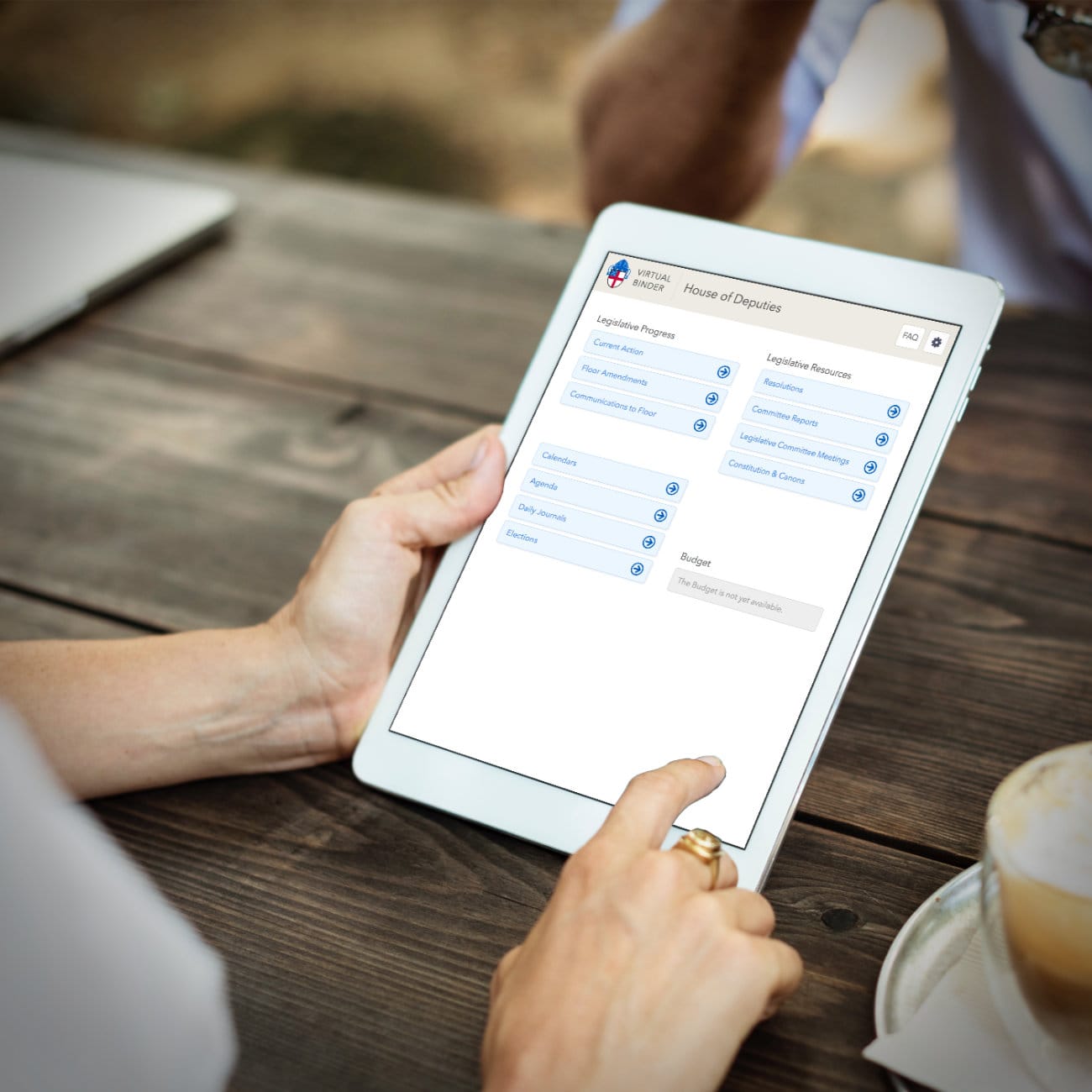 Bringing legislation into the 21st century

The Episcopal Church is part of the worldwide Anglican communion, with 109 dioceses across 17 countries. Every three years, the Church holds its General Convention.  This is a key event in the governance of the Church.

We were commissioned to create a software tool to support the process of prefiling, processing, and finalizing resolutions before and during the event, according to the Church’s strict rules and procedures, accessed by a sitewide wireless network.

The Church has many Commissions, Committees, Agencies, and Boards (CCABs), each concerned with a different topic. Its hierarchy also includes Bishops, Legislative Committees, Church Provinces, Dioceses, and Deputies. Any one of these groups and individuals can propose resolutions, which are then submitted to the General Convention Office for review.

During the Convention, resolutions are discussed in Legislative Committees. When the Committees have made a recommendation to their House (to adopt with or without amendment or to reject), the Floor discusses and votes on the resolution, following which it is either passed (possibly amended) or rejected.

All these processes are supported by our software, which also generates a full audit trail of every step along the way.

Before the Convention, each diocese elects a delegation of Deputies to attend, plus Alternate Deputies who can replace a Deputy if required. Each election needs to be signed off by a higher authority such as a Bishop. Our software also handles the administration of both these sets of elections, including signoff.

"For a gadgeteer like me it was a source of constant wonder.
And for everybody it was a vast simplification of the process of doing Convention’s business.
There was even one day when we finished all the resolutions ahead of time and had to adjourn for the day because we’d caught up with the business – something I’d never heard of happening before! – and the ease and speed of the online binder was what made that possible."

Previous versions of our software supported a paper-based workflow. For the 2015 Convention, we have helped the Church move to a system that relies more on screens than on paper. The event is billed as the ‘Greening and Screening’ Convention, indicating its reduced carbon footprint and the switch to Deputies and Bishops using iPads during the event, providing access to a "Virtual Binder" that contains all their legislative material as well as allows them to track progress throughout the Convention.

The Convention will be served by a giant Wi-Fi system, allowing all 1700 attendees to access the software. To reduce congestion on the wireless network, data transmission is kept to the absolute minimum, using a combination of caching and compression.

The Convention module is just one part of the solution we developed for the Episcopal Church. We also provided a group collaboration tool, software for relationship management, two meeting-planning applications and a website with dynamic links to the relationship-management and meeting apps.

Legislative Processing Online, the application that we built for the Episcopal Church, allowed their General Conventions to complete the legislative process ahead of time for the first time in years.